FIDO was formed in 2005 as a volunteer-based animal advocacy group that helps people improve the quality of life for their outside dogs—with a focus on chained and neglected dogs. FIDO helps residents of Indianapolis find alternatives to continuous chaining as a method of dog containment while promoting proper care and treatment. FIDO works with citizens to help bring their dogs inside the home to be part of the family.

Our areas of focus are the urban, low income, higher crime neighborhoods of Indianapolis. Many of the citizens we work with struggle with their own issues, including poverty, medical issues, and victimization. They often love their dogs but need guidance and resources to provide a more humane level of care. Many of the dogs we help have never been to a veterinarian and spend most of their lives outside.

Targeted humane education and outreach is a large part of the work we do at FIDO. We offer guidance and assistance with supplies and services to residents who are willing to work with us to improve their dogs’ quality of life. FIDO works in partnership with other organizations to provide spay/neuter assistance, which we require, for the dogs we serve. Our help is provided for free or at a nominal fee.

We offer guidance and assistance to dog owners who are willing to work alongside us to improve their companion’s quality of life and make them part of the family. For low-income dog owners, we offer fenced enclosures, fencing repairs, inside training crates, dog houses, straw bedding, flea and fly treatment, collars, and leashes. We also assist with free or low-cost spay/neuter for all dogs we serve.

Although FIDO has no law-­enforcement authority, we work with Indianapolis Animal Care Services (IACS), the government agency responsible for enforcement of animal laws and ordinances in the city. Through this partnership, animal control officers refer dog owners to FIDO who have been found to be in violation of local care and treatment ordinances or leash laws. We often help these citizens with guidance on the humane containment of dogs as well as provide them with necessary supplies. Officers also refer owners to FIDO who may not be in violation of any animal laws but may need assistance to improve the care they provide for their dog.

In turn, FIDO refers cases to IACS officers when the agency may need to intervene to ensure that a minimum level of care is provided for neglected dogs. We also contact IACS when we are notified that animals are abandoned or abused.

We Partner with Others Who Help Animals

FIDO cooperates with many other local nonprofit animal­-welfare groups to improve the quality of life for dogs, to help provide spay/neuter services to dog owners, and to find new homes for adoptable dogs that are found loose on the street or have been surrendered to FIDO. Our main partners are the FACE Low-­Cost Animal Clinic, Spay­-Neuter Services of Indiana, Indyhumane, and Southside Animal Shelter. We also partner with SOAR, ARPO, and West Michigan Street Veterinary Clinic. 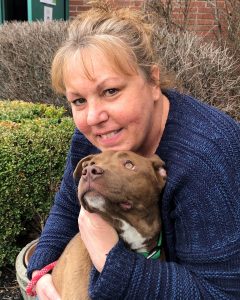 Darcie obtained a Master’s degree in Physiology from IU School of Medicine in 1991. She worked for IU in clinical research for several years before obtaining a pharmacokinetic analyst position at Eli Lilly and Co and remained at Lilly for 15 years. While at Lilly, Darcie became increasingly active in local animal welfare initiatives in Indianapolis. She served on the Indianapolis Animal Care Services (IACS) Advisory Board for several years as board chair. In 2005, Darcie founded FIDO to address the suffering of chained and neglected outside dogs in Indianapolis. She served as FIDO board president and active volunteer leader for many years.

In 2010, Darcie was offered the position of Deputy Director of Kennel Operations at IACS. During Darcie’s tenure at IACS, she managed a kennel staff of 22 employees, implemented multiple SOPs, working to implement best-practices with regard to animal care and to increase the live release rate. In 2012, Darcie joined the FACE Animal Clinic as the Director of Outreach and Medical Services.

In late 2017, Darcie was hired as FIDO’s first Executive Director. Darcie is responsible for day-to-day management of FIDO’s programs, revenue and expenses, procurement of supplies/services, grant funding, individual donor cultivation, and oversight of four employees and 5 part-time contractors. Darcie has worked to grow the FIDO programs to increasingly meet the animal welfare needs of the Indianapolis community.

Darcie always has a house-full of dogs and currently shares her home with Elwood the sweet Shepherd mix, Russell the timid Jack Russell terrier, Jefferson the wild beagle/Chihuahua mix and Raisinette, the nervous Pit bull/Labrador mix. 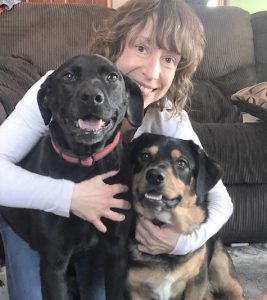 Michelle has always had an interest in animals, and in 1998, she started volunteering with Indyhumane and in 2000 with Indianapolis Animal Care Services (IACS), where she volunteered for the next 12 years. It was here that she became committed to improving the lives of neglected/vulnerable dogs in our community. She started volunteering with FIDO in 2005 because she was drawn to the simple idea of getting dogs off chains. She has served in a variety of volunteer capacities including Fence Program Leader and Board Vice-President.

In 2012, Michelle became a contract employee of Indianapolis Animal Care Services as a Temperament Tester, where she was responsible for evaluating dog behavior. She remained at IACS until 2018 when she became an employee with FIDO. As the Volunteer & Marketing Coordinator, she is focused on increasing awareness and overall support for FIDO while also expanding our volunteer base and developing leadership positions to ensure growth of our programs.

Michelle’s husband Mike has assisted FIDO with various projects throughout the years and has been an instrumental part of our Fence Program from the start. Michelle has 2 children, Theo and Max, who are both all boy but share a love for animals, and 3 dogs, Frankie, Peanut and Sam and 1 cat, Minnow. 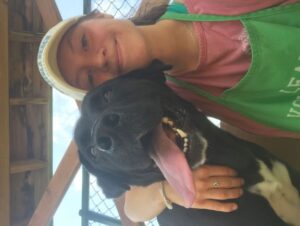 Rebekkah is a graduate student at IUPUI working towards her Master’s in Public Affairs. She realized her passion for animal welfare when she began volunteering at her local animal shelter at age 15. She quickly earned the title of “Lead Volunteer” and spent most of her downtime socializing shelter dogs and training new volunteers.

In 2018, she completed an internship at Williamson County Animal Center in Franklin, Tennessee where she learned the ins and outs of animal sheltering and was offered a position as a kennel technician. Rebekkah worked as a kennel technician there for two years and spent the summer of 2020 assisting with the shelter’s community cat program, specifically by helping community members in rural areas with transportation barriers get their community cats spayed/neutered. Rebekkah has also worked as a dog walker since 2017 in Indianapolis, where she loves getting to meet and exercise different dogs in the city.

Rebekkah was hired in October of 2020 as FIDO’s Administrative and Field Assistant. She quickly gravitated to field work and was named a FIDO Case Manager. In this important role, she she can focus on client home visits and follow-ups. She also leads one of FIDO’s bi-weekly Spay/Neuter transport teams.

Rebekkah does not have any pets of her own but she fosters kittens from IACS during the summers and opens her home to the friendly community cats in her area when they need some shelter, food, and attention.

Board of Directors, President

Board of Directors, Vice-President

Board of Directors, Treasurer