Latricia is a FIDO client. She has two dogs of her own, both fixed and living inside with her. Recently, a neighbor moved away and turned her own dogs loose out in the yard. Latricia noticed the young female dogs sitting outside the neighbor’s door waiting to be let back in. But their owner never returned.
Latricia was immediately concerned for the dogs’ welfare. But more importantly, she put her concern into action by quickly taking the two abandoned pups into her own home. She named them Cleo and Sheba. 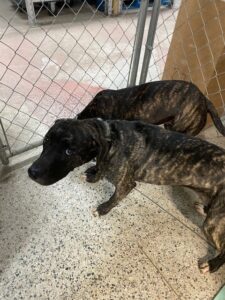 Latricia called FIDO for help with some extra dog supplies and help finding the pups a new home. She was trying to find homes for the pups with friends and family, and was all about ensuring they were both spayed before going to the new home. But none of the potential homes with friends and family actually panned out and Latricia wasn’t going to give the pups to just anyone.
Since Latricia works long hours, we offered to help expedite and transport the pups for intake at Indyhumane. We found the pups to be exactly as Latricia had described them: very docile and friendly. Although Latricia had a hard time letting the pups go and shed a few tears along the way, she knew sending them to Indyhumane was best for the pups. We are heartened to know there are compassionate, take-charge, and smart women like Latricia in our community who decide to DO the right thing for animals when the need arises.
Share this post
Share with FacebookShare with TwitterShare with LinkedInShare with WhatsApp
Go to Top